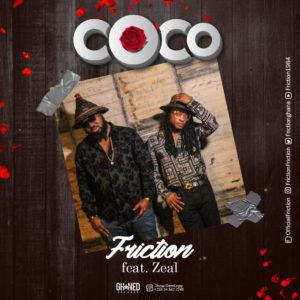 Former leader and founder of VIP music group, Friction is set to release a new single titled ‘Coco’, on which he teams up with his former colleague and current member of VVIP Music group Zeal.

As we wait for the official date of release of the upcoming banger, the artwork of the song has been made public.

The song is expected to be released with a video which was shot in Holland.

Friction is a former member of the defunct VIP music group, now VVIP, who embarked on his solo project after the success of the group.

He is currently signed onto GhaNed Record label.

He’s based in Europe but has been embarking on several tours across the globe with his music.

‘Coco’ is obviously the latest soon to-be- released track to watch out for by all music lovers.

Vibe with friction via the following social media platforms;

Phrimpong To Premiere The Salary EP at The Basement; Unveils Artwork and Tracklist