Kelvyn Boy and Sista Afia in a relationship? Fan reveals 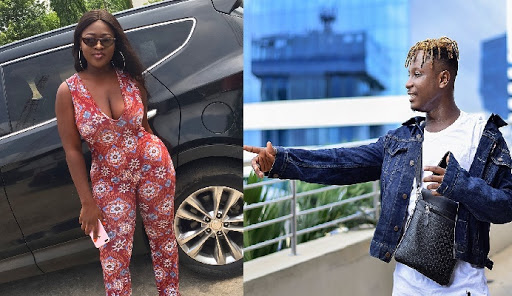 We have just received this message from an anonymous source on one of our social media pages, accusing Stonebwoy’s Kelvyn Boy having a secret fling with another singer Sista Afia.

According to her, these two singers have been involved in a relationship for close to two months now and has videos to back her statement

Let’s read from her (Unedited) :

Hi I want my name hidden from this because i don’t want attention just wan to give you this news.
Sista Afia said in one of her interviews that she is single and don’t need any man tho she finds Kelvynboy to be sexy. I say this is not true, I mean the part where she said she is single because I know she’s dating Kelvynboy
Me and my girls were in Carbon Nyt Club last month for Kelvynboys show where Sista Afia too was present. The two of them were all over each other like falling in love with someone from start. That feeling where you two want to keep holding each other’s hands for ever
I don’t mean to gossip or anything because me I love Sista Afia’s songs so when I saw her in person I told my friends I won’t leave until I take a picture with her, that is when i had to keep waiting till she leaves Kelvynboy before I could take that picture
They were alone and talked for very long and everyone in the club realized they were up to something. One of my girls did Snapchat’s of them that night which I’ll send to you soon.
One lady who came with Kelvynboy even tried pulling him from Sista Afia but you see they were too busy in the middle of whatever they were talking about and she got angry.

This is what we have from our source.

DJ Sly Embarks on “The Unstoppable Tour” in USA

Music Lovers Are Being Treated Like Prisoners – Naf Kassi

DJ Sly Embarks on “The Unstoppable Tour” in USA

Music Lovers Are Being Treated Like Prisoners – Naf Kassi